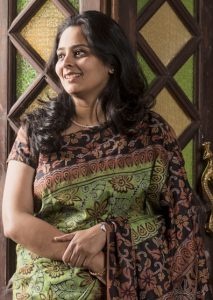 Aishwarya Tipnis was a participant of the 1st Edition of the Global Cultural Leadership Programme.

Aishwarya Tipnis is the principal architect of an eponymous architectural practice based in New Delhi, India. She is the recipient of the highest civilian honour in the culture sector the insignia of Chevalier des Arts et des Lettres (Knight of the Arts and Letters), by the Government of France in 2018 fir her outstanding commitment to preservation of French Heritage in India. An alumnus of the School of Planning & Architecture New Delhi, she has Masters Degree in European Urban Conservation with distinction from the University of Dundee, Scotland in 2007.  She is also the recipient of the UNESCO Award for Heritage Conservation in the Asia-Pacific Region (Award of Merit: Mahidpur Fort & Honourable Mention for Doon School, Dehradun) in 2016. Recognised as a Global Cultural Leaders by the European Union’s Cultural Diplomacy Platform in 2016, she is also the recipient of Commonwealth Professional Fellowship 2011 as well as Scottish International Scholarship 2006. She has been a consultant to UNESCO, Asian Development Bank, World Monuments Fund New York as well as Embassy of France in India, Embassy of Kingdom of Netherlands in India. She is also a visiting faculty to Department on urban Design at the School of Planning & Architecture in New Delhi.

“The only architect in a group of art managers, cultural practitioners and artists; the cleverly designed programme as well as cross-disciplinary interactions with the participants & tutors became instrumental in introspection as well as acquisition of a diversity of soft skills. The experience was indeed inspiring, enriching and highly motivating as well as empowering. I was able to recognise my own potential as a global cultural leader and developed a broader vision and a new perspective to life.”

In order to introduce themselves and their organisations, the participants prepared a poster presenting 4 elements – Me, My organisation, My Project and My Dream.
Download (pdf)