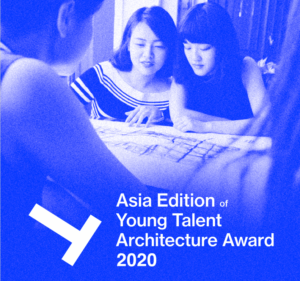 The Cultural Diplomacy Platform has supported the launch of the Asian Edition of Young Talent Architecture Award(YTAA). This special edition is open in parallel with the 2020 European edition, which has been launched in December 2019. YTAA is organised by the Fundació Mies van der Rohe with the support of the Creative Europe programme of the European Union.

In 2016 the first call was opened to all European architecture schools. In 2018, schools from China and South Korea were invited to participate as guest countries. In 2020, for the first time, an independent edition is organised with the four Strategic Partners of the European Union in Asia: China, India, Japan and South Korea aiming to promote exchange and cooperation with their YTAA counterparts in Europe and in the 2020 guest countries: Brazil, Chile and Mexico.

By identifying and supporting the best young talents from Europe and Asia and bringing them together in a joint exhibition and awards ceremony in Venice, YTAA facilitates intercultural dialogue and offers cooperation opportunities among professionals, universities, institutions and other relevant partners in the architecture sector.

YTAA recognises the talent of recently graduated architects, urbanists and landscape architects, and facilitates their interaction with the sector’s main stakeholders in Europe, providing the opportunity to develop synergies and complementarities with the architecture offices and institutions of their choice.

Asia Edition of YTAA 2020 is open for graduation projects presented between January 2018 and December 2019 by students from a group of selected schools in China, India, Japan and South Korea. This selection has been made possible following a mapping carried out with the support of the Cultural Diplomacy Platform.

The 3 Winners of the Asia Edition of the YTAA 2020 will be announced on 5 October 2020 during the World Architecture Day.