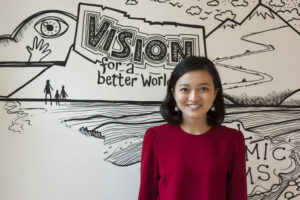 Mizuki Kojima is an assistant director in the programming and administration section at the Japan Foundation’s Paris office (Maison de la culture du Japon à Paris), which is a Japanese governmental organisation under the aegis of the Ministry of Foreign Affairs. After three years of working in the headquarters in Tokyo, she has been assigned to the current position in Paris and has organised and managed various kinds of projects to promote cultural and intellectual exchanges between France and Japan. She has a BA in Economics from Hitotsubashi University in Tokyo, with one year of studying abroad at the University of Birmingham in the UK. Her former job was in the field of advertising on daily newspaper (Nikkei Inc.), where she was responsible for planning and sales of advertising contents.