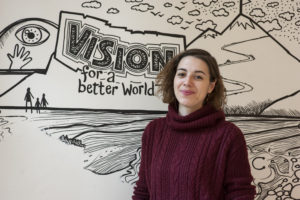 Anna Sagalchik is a lead manager at a cultural projects department at the New Stage of Alexandrinsky theatre. She graduated from Belarus State University in 2012, sociology. Now she is studying at the master program «Designing of international theatre programmes» in Russian State Institute of Performing Arts. Anna worked as PR-manager and project manager with public relation and marketing at international advertising agency. Since 2014 Anna has been working at non-government theatre as an independent producer, she organized tours to festivals in Russia, international exchange with Belgian actress. Anna is a curator of different cultural projects from music concerts to inclusive theatre projects. Now she is producing documentary performance by Anatoly Praudin. Anna is interested in social, documentary theatre, international projects and festival movement; networking for developing management skills.