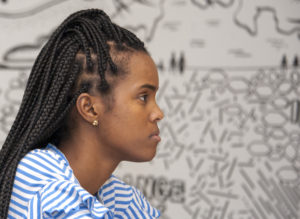 Alica Hall strongly believes in the transformative potential of the arts to empower and strengthen marginalized communities. She has a professional background in strategic communications, having spent 6 years as a communication specialist supporting health and non-profit organizations, but her passion lies in creating spaces for artists to create, learn and connect with new audiences. Alica is the Executive Director of Nia Centre for the Arts, where she is leading the development of Canada’s first professional multi-disciplinary arts facility dedicated to supporting and showcasing African-Canadian artists. This $5-M capital project will transform the Nia Centre’s 15,000 sq. ft. facility to create a 150-seat theatre, artist studios, a digital media lab, a recording studio, event space, co-working space and gallery space. As a leader with deep roots in the community, she most recently she served as the Co-chair of Pride Toronto, the largest LGBTQ+ festival in North America. Under her leadership, the festival grew from the traditional 10 days to a month, by increasing sponsorships and partnering with cultural institutions to bring queer artists into new venues. She has also developed a number of youth programs in Toronto’s underserved neighbourhoods and worked as an advisor to the provincial government to advise them on developing policies and funding models to inform positive youth development. She attended York University and holds a Bachelor’s degree in International Development Studies.