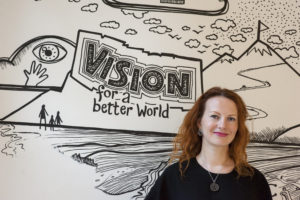 Ada Mukhina is nomadic artist, theatre director, curator, art journalist and pedagogue from St. Petersburg (Russia). Founder and director of Theatre project Vmeste, Russian collaborative theatre group that has been creating socially engaged, participatory and interdisciplinary performances for over 6 years. Graduated with distinction from the Russian State Institute of Performing Arts, where she was later invited as a visiting lecturer. As Chevening Scholarship undertook her second MA in Advanced Theatre Practice at the Royal Central School of Speech and Drama in London. As German Chancellor Fellow conducted a research-based project about theatre for social change in Germany resulted in multiple publications and a theatre production. Presented her work in Germany, UK, Netherlands, South Africa and Russia. Her recent performance “RiskLab”, that explores risk in art and artists at risk through technology, was premiered in October at Camden People’s Theatre, London.