Forum on cooperation between ECoC and EACC, Shanghai, China 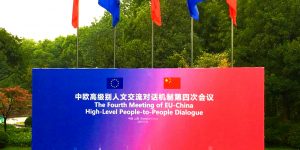 In the framework of the EU-China High-Level People-to-People Dialogue, the Cultural Diplomacy Platform organised a Forum on Cooperation between European Capitals of Culture (ECoC) and East Asia Culture Cities (EACC) in Shanghai on 14 November 2017. The forum was opened by EU Commissioner for Education, Culture, Youth and Sport, Mr. Tibor Navracsics, and Vice-Premier of the People’s Republic of China, Ms. Liu Yandong.

Focused on promoting cities with a regional dimension, the forum discussed the opportunities and potentials for ECoC/EACC transregional cooperation and collaboration.

European Capitals of Culture are cities designated by the European Union for a period of one year during which they organise a series of cultural events with a strong European dimension. Launched in 1985, the programme allows selected cities not only to demonstrate local cultural highlights, legacies and innovations, but also to attract artists from other European Member States. The programme can also foster urban and cultural infrastructure regeneration, change the cities’ image and raise their visibility and profiles on an international scale, attracting tourists and investments. Ultimately, the programme aims at bringing Europeans closer together. 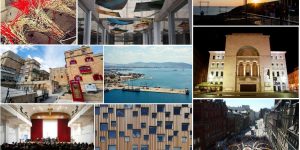 The ECoCs taking part in the Forum were Mons (Belgium), Rijeka (Croatia), Paphos (Cyprus), Aarhus (Denmark), Marseilles (France), Athens (Greece), Elefsina (Greece), Matera (Italy), Valetta (Malta), Timisoara (Romania), Novi Sad (Serbia), Košice (Slovenia), Maribor (Slovenia), Umea (Sweden) and Liverpool (UK). Each city’s mayor had the chance to introduce their city and share their experience of the ECoC title and the impact it has had on their city.

It is during the third, fourth and fifth China-Japan-Republic of Korea Summit that the idea of the East Asia Culture City was born and evolved to finally be launched in 2013. In 2015, the leaders of the three countries issued a Joint Declaration for Peace and Cooperation in Northeast Asia, which praised the East Asia Culture City scheme for deepening the mutual understanding, increasing cultural ties and serving as a platform for cultural exchanges and cooperation among the three countries. Each year, the Culture Ministers of China, Japan and the Republic of Korea jointly award the title to the cities selected as East Asian Culture Cities – one in each country.

The EACCs have been exploring new possibilities to make synergies in building EACC inter-city network. On trilateral cooperation platforms among China, Japan and ROK, efforts are made to enrich inter-city dialogues and achieve tangible results. By increasing the visibility and profile of the cities, the EACC programme brings benefits to the cities and the people. The cultural exchanges and cooperation between the three countries concern the area of cultural dialogues, safeguarding and transmitting intangible cultural heritage, heritage protection and public cultural service system development, and urban planning best practice. 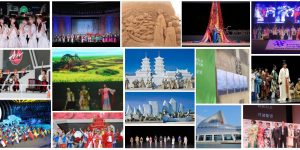 Programme of the Forum on cooperation between ECoCs and EACCs, Shanghai, 14 November 2017 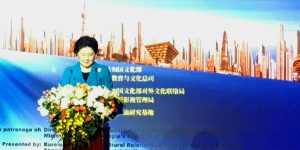 After the opening ceremony participants gathered to discuss how ‘Capital/City of Culture’ titles can promote urban transformation, remodeling and social cohesion. Issues on the table also included international cultural communication and cooperation. 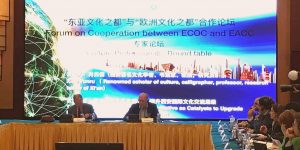