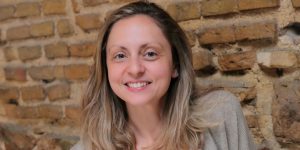 Matina Magkou was a participant in the 2017 edition of the Global Cultural Leadership Programme.

Matina Magkou is a freelance cultural and social impact programmes manager, researcher and trainer. She collaborates with organisations such as the World Leisure Organisation, the Bodossaki Foundation, FIA, IETM, ENCATC, Ashoka, the British Council, the Youth Partnership and the Greek Ministry of Education. From 2017 to 2019 she worked for the Athens Development and Destination Management Agency and has recently moved to Nice, France. She has previously worked for the Athens Olympic Games, the European Capital of Culture Patras 2006, the International EXPO Zaragoza 2008, the European Parliament, for festivals (Athens Festival, Doha Film Festival) and in international theatre touring. She’s been a collaborator of Ohi Paizoume/ UrbanDig project since 2015, and is responsible for development and international relations. Matina also participated in the TANDEM Europe programme. She holds a Ph.D. on the international cultural cooperation programmes with a focus on the Euro-Arab region and her research interests focus on cultural diplomacy and cooperation, cultural and creative industries, creative tourism and urban regeneration.