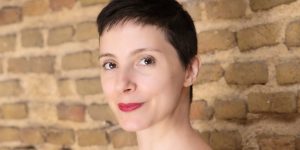 Eriola Pira was a participant in the 2017 edition of the Global Cultural Leadership Programme.

Eriola Pira is a New York-based art curator and writer. Eriola is the Program Director and Curator at NARS Foundation, and manages the international residency, exhibition, public programming, and education programs. Prior to this she directed the Young Visual Artists Awards, an international artist exchange and New York residency program, in partnership with 11 art organizations in Eastern Europe, for which she continues to oversee a curatorial exchange program. She has curated exhibitions, produced public programming, and lectured across Europe and the US, and worked with such institutions as the Studio Museum in Harlem, Independent Curators International, Exit Art, NURTUREart, International Studio and Curatorial Program (ISCP) and Residency Unlimited. As an editor and writer, Eriola’s work has appeared in Guernica Magazine, Bomb Magazine, Huffington Post and Kosovo 2.0, among other various catalog essays.

In order to introduce themselves and their organisations, the participants prepared a poster.