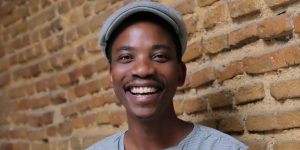 Malose Malahlea was a participant in the 2017 edition of the GCLP.

Malose is an artist/organiser and cultural producer equally interested in socially engaged art practices and the role the audience or community play in the co-creation to address own social narratives. Together with Rangoato Hlasane he co-founded Keleketla! Library in Johannesburg in 2008. Keleketla! Library, nominated for the Vera List Prize in Art and Politics (2014) and the Visible Awards (2017) presence a legacy of multifaceted cultural presentations: literary, film, music, performance, installation, visual art and other not yet defined forms. Keleketla! executed distinguished projects across the board and on global platforms such as the 10th Berlin Biennale (2018), Art Basel (2019) and the Chicago Architecture Biennial (2019).  The last public performance Keleketla! staged at the Drill Hall since the four year ethical exile from the site was April 14th, 2018 titled ‘Public Hearing’ – a performance of memory against erasure and accountability, in which people (rather than property itself) are implicated in issues having to do with land, rent and the asymmetry in how culture is produced, consumed and memorialised in a country such as South Africa.

“When a person is exposed to a learning process that’s embedded in exchange of ideas, information, and methodologies practiced by other nationalities, that experience changes/adds to your thinking. That’s how the GCLP was for me. We had practitioners from all over the world and hearing their stories, challenges and successes inspired me. I also appreciated that we had more women than men because it was amazing to have women’s voices represented in the programme.”