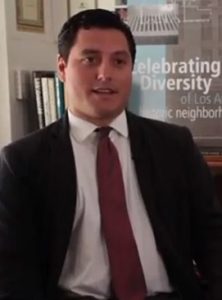 Edgar Garcia was a participant of the 1st Edition of the Global Cultural Leadership Programme.

Edgar is Executive Officer to the Chief of Staff for Los Angeles Mayor Eric Garcetti. Born and raised in Los Angeles, he is a first-generation Mexican-American committed to expanding and diversifying the cultural ecology of Los Angeles. He has extensive experience in arts administration, urban planning, historic preservation, and cultural resource management.  Awarded by the Getty Foundation and the Getty Leadership Institute, he has also been named a Fitch Scholar, a Royal Oak Foundation Scholar, a Pocantico Fellow with the Rockefeller Brothers Fund, and a Diversity Scholar for the National Trust and Historic New England. He previously served on a US-Russia diplomatic exchange with the U.S. International Council of Monuments & Sites. He was recipient of the 2018 German Marshall Memorial Fellowship. He is a graduate of Yale University and UCLA.

“As a practitioner of municipal arts and cultural policy, my participation in the GCLP was an opportunity to reevaluate my core career principles in the context of a rapidly changing world responding to globalization and new technology. Accomplishing such a personal and heartfelt task was only possible by the nurturing and dynamic environment created by the GCLP for all the international participants from around the world. Confronting the challenging tasks of being an effective cultural leader at the both the local level and international stage was made easier by learning amongst my colleagues in a spirit of friendship and openness. Seeing one’s hopes and fears reflected in other participant’s words and thoughts led to a renewed sense of self and greater empowerment.  The friendships formed and lessons learned during time spent with the GCLP in Malta continue to inspire me to be an effective leader for both my local community and global partners.”

In order to introduce themselves and their organisations, the participants prepared a poster presenting 4 elements – Me, My organisation, My Project and My Dream.